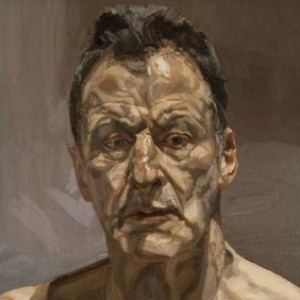 British painter and draughtsman. He was the son of the architect Ernst Freud (1892–1970) and the grandson of SIGMUND FREUD. His family moved to England in 1932, and in 1939 he became a naturalized British subject and enrolled at the East Anglian School of Painting and Drawing, Dedham, run by Cedric Morris. Apart from a year in Paris and Greece, Freud spent most of the rest of his career in Paddington, London, an inner-city area whose seediness is reflected in Freud’s often sombre and moody interiors and cityscapes. In the 1940s he was principally interested in drawing, especially the face, as in Naval Gunner (1941; priv. col., see Gowing, pl. 22), and occasionally using a distorted style reminiscent of George Grosz, as in Page from a Sketchbook (1941; priv. col., see Gowing, pl. 17). He began to turn his attention to painting, however, and experimented with Surrealism, producing such images as the Painter’s Room (1943; priv. col., see Gowing, pl. 26), which features an incongruous arrangement of objects, including a stuffed zebra’s head, a battered chaise longue and a house plant, all of which survived his Surrealist phase and appeared separately in later paintings. He was also loosely associated with Neo-Romanticism, and the intense, bulbous eyes that characterize his early portraits show affinities with the work of other artists associated with the movement, such as John Minton, whose portrait he painted in 1952 (London, Royal Coll. A.). He established his own artistic identity, however, in meticulously executed realist works, imbued with a pervasive mood of alienation. He was dubbed by Herbert Read ‘the Ingres of existentialism’ (Contemporary British Art, Harmondsworth, 1951, rev. 1964, p. 35) because of such images as those of his first wife, Kitty (the daughter of Jacob Epstein), nervously clutching a rose in Girl with Roses (1947–8; London, Brit. Council).