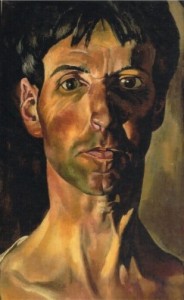 Spencer received his first formal training in 1907 at the Maidenhead Technical Institute, Berkshire. A year later he enrolled at the Slade School, London, where, as a day student nicknamed ‘Cookham’ by his fellow students, he remained until 1912. In that year his painting the Nativity (London, U. Coll.) was awarded both the Melville Nettleship and the Composition prizes. It shows the wide range of his early influences, from 15th-century Renaissance painting to the Pre-Raphaelites and Post-Impressionism: just as Gauguin’s Yellow Christ (1889; Buffalo, NY, Albright–Knox A.G.) was set in Pont Aven, Spencer’s similarly Neo-primitive Holy Family is placed in Mill Lane, Cookham. By then Spencer had firmly established his birthplace at the centre of his spiritual universe. He wrote, ‘When I left the Slade and went back to Cookham, I entered a kind of earthly paradise. Everything seemed fresh and to belong to the morning. My ideas were beginning to unfold in fine order when along comes the war and smashes everything.’