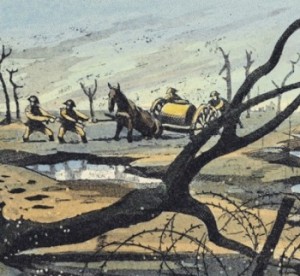 English painter, draughtsman, printmaker, illustrator and poet. David Jones’ creative life was largely determined by two experiences. During World War I he served on the Western Front with the 15th Royal Welch Fusiliers, an event that he regarded as epic and imbued with religious, moral and mythic overtones, in which Divine Grace manifested a continual presence, an approach to thinking about the war distilled in the structure of his epic poem In Parenthesis (London, 1937). The second experience, related to the first, was his conversion to Roman Catholicism in 1921. This immediately led him to join Eric Gill’s community at Ditchling, Sussex, where he was a postulant in the Guild of St Joseph and St Dominic, after having spent three fruitless years at the Westminster School of Art, London, where he had been taught by the English painters Walter Bayes (1869–1956) and Bernard Meninsky (1891–1950) and occasionally by Walter Sickert.