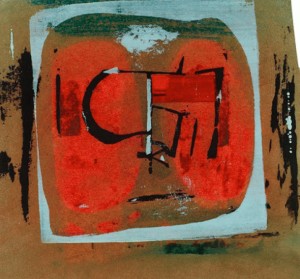 Lanyon was born in St. Ives, Cornwall in 1918. He attended Penzance School of Art before moving to the Euston Road School of Art, London, where he was taught by Victor Pasmore. On his return to St. Ives he met Ben Nicholson, Barbara Hepworth and Naum Gabo – all three of whom had departed London to escape the war, and it was around these artists that the St. Ives School, with Lanyon amongst them, was born.

Lanyon’s first one-man exhibition was at the Gimpel Fils in London, 1949. Regular exhibitions there would follow in the fifties, and Lanyon also participated in group shows with the Arts Council and the British Council.

In the late fifties (1957) Lanyon visited New York for an exhibition of his works at the Catherine Viviano Gallery. Subsequent exhibitions through the next decade would take place here, but in New York Lanyon also met and befriended Mark Rothko and Robert Motherwell, both of whom would make visits to St. Ives. His work in England was at this juncture meeting with critical success: he won the Critics’ Prize in 1954; second prize in the John Moores exhibition (1959) and the Marzzotto acquisition award (1962), but actual sales were slow. All the more welcome, therefore, his relative success in the US, and sales there allowed Lanyon to pursue an interest in flying.

Lanyon’s work started to be recognized more widely in Britain in the 1980’s. He is now hailed as an innovator, particularly for his interdisciplinary approach to landscape painting. Lanyon’s work is esteemed by private collectors, but his work can also be found in public collections: at the Tate; the Scottish National Gallery of Modern Art; the city of Birmingham Museum and Art Gallery, and the Whitworth Art Gallery, Manchester.