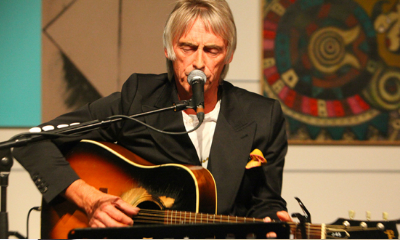 The guest of honour was Sir Peter Blake himself, whose extensive musical connections are currently being celebrated at the Gallery with a major exhibition called ‘Peter Blake and Pop Music’ (until 7 October 2012).

Weller, whose Stanley Road cover was designed by Sir Peter Blake, said: “The sleeve is iconic, isn’t it? It’s a work of art and a statement of its time. I loved it and always will.”

The performance was followed by a successful auction with prizes including an exclusive limited edition screenprint of Blake’s renowned portrait of ‘The Beatles 1962′ which is housed in the Gallery’s own Permanent Collection and can also be seen in the exhibition. ‘The Beatles, 1962′ limited edition screenprint can also be bought from Pallant Bookshop.

All proceeds raised from the evening will go towards the Gallery’s Endowment Fund which was established in 2002 to generate an annual income from the interest and sustain the long-term future of the Gallery. Monies raised will be match funded up to £1m through the Catalyst Endowment Grant.