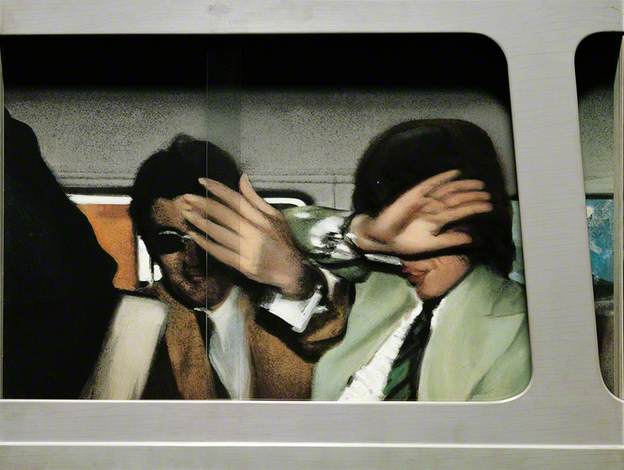 On 28th June 1967, The Daily Express ran an article on the arrests at the home of Keith Richards, lead guitarist of the Rolling Stones, at Redlands in West Sussex.

‘JAGGER SPENDS NIGHT IN CELL‘
‘The prison doors clanged last night behind Mick Jagger, lead singer of the Rolling Stones. And ahead stretched a night in a Lewes jail cell for the long haired pop idol of the teenagers […]. Jagger travelled the 37 miles to Lewes in a prison van with Fraser and four other men – and it was to teenage screams that he left Chichester.’

Pop artist Richard Hamilton created six different versions of ‘Swingeing London‘ in protest to the arrests of his friends including his own art dealer, Robert Fraser which later turned into the notorious Mars bar drugs trial. Each artwork included a screenprint version of The Daily Mail photograph of a handcuffed Mick Jagger and Robert Fraser being driven to Chichester Magistrates Court. This version, part of the permanent collection at Pallant House Gallery donated through the Wilson Gift, is encased in a relief-moulded frame with glazed panel to simulate the police van windows.

Other celebrated works include the 1956 collage, ‘Just What is it that Makes Today’s Homes So Different, So Appealing?‘ one of the first ever true Pop Art images. The collage depicting the word POP on a lolly being held by a muscleman was specially created for the legendary ‘This Is Tomorrow Exhibition‘ at the Whitechapel Gallery in London.

Hamilton, one of the original pop artists who died recently at the age of 89 was considered as one of the most influential artists of the 20th century.