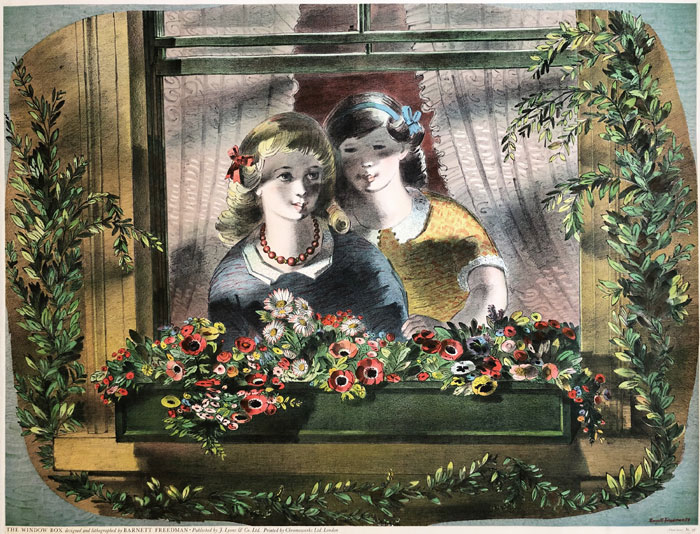 A peer of Eric Ravilious and Edward Burra, Barnett Freedman was one of Britain’s most sought-after commercial designers in the mid-20th century.

People were at the heart of Freedman’s work. In mid-century Britain, his art could be seen by anyone in their everyday life: from book jackets to posters on the London Underground and beer advertisements in pubs. An outstanding and prolific commercial designer, Freedman worked with clients such as Ealing Studios, London Transport, Lyons’ Tea Houses and more.

Born in East London to Jewish immigrants from Russia, Freedman showed an early talent for drawing. He studied at the Royal College of Art from 1922-25 under Paul Nash alongside Eric Ravilious, Edward Bawden, Edward Burra and Enid Marx. Nash referred to this period at the college as “an outbreak of talent”.

Freedman’s first major commission was to design and illustrate Siegfried Sassoon’s ‘Memoirs of an Infantry Officer’ for book publishers Faber & Faber. He went on to illustrate dozens of book covers for classic novels by Charles Dickens, Charlotte Bronte and Leo Tolstoy. His designs for War and Peace (1938) and Anna Karenina (1951) are two of the finest examples of 20th century book design.

At the outbreak of the Second World War, he was appointed as an Official War Artist. He travelled with the British Expeditionary Force in France along with Edward Ardizzone and Edward Bawden. In 1941 he worked on-board HMS Repulse, producing a popular print for the National Gallery. In June 1944 he travelled to France to record the aftermath of the D-Day Landings.

Freedman was awarded a CBE in 1947 and made Royal Designer for Industry in 1949. He had a lasting legacy in British book illustration, printmaking and graphic design. This exhibition is the first major reappraisal of his work since his 1958 Arts Council retrospective at the Tate Gallery.

online range which accompanies the exhibition