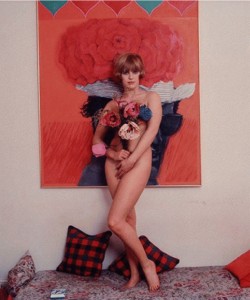 One of the few female artists associated with the British Pop Art movement of the 1960s, Boty has been largely overshadowed by her male Pop counterparts since her untimely death aged just 28.

Pauline Boty first studied at Wimbledon School of Art and then the Royal College where she met David Hockney, Sir Peter Blake, Derek Boshier and Peter Phillips. Sociable, charismatic and popular, Boty was a striking figure, dubbed the ‘Wimbledon Bardot’ on account of her extreme good looks.

In 1961, Boty exhibited in what has since been described as the first ever Pop Art exhibition, ‘Blake, Boty, Porter, Reeve’, at the AIA Gallery, receiving positive attention in the national press for the Pop sensibility of her collages, and the following year she was one of the four artists profiled in Ken Russell’s landmark 1962 documentary on English Pop Art, Pop Goes The Easel. This innovative and influential film for the BBC’s Monitor series placed Boty at the centre of emergent British Pop.

Boty’s premature death of cancer in 1966, aged just 28, cut her career short and her works were not exhibited for nearly thirty years. While her glamorous persona and high-profile connections such as her marriage to the actor and literary agent Clive Goodwin have endured, until recently, her work has been largely overlooked, lost in the limelight cast on her male Pop Art counterparts.

The exhibition Pauline Boty: Pop Artist and Woman is on display at Pallant House Gallery from 30 November 2013 to 9 February 2014.